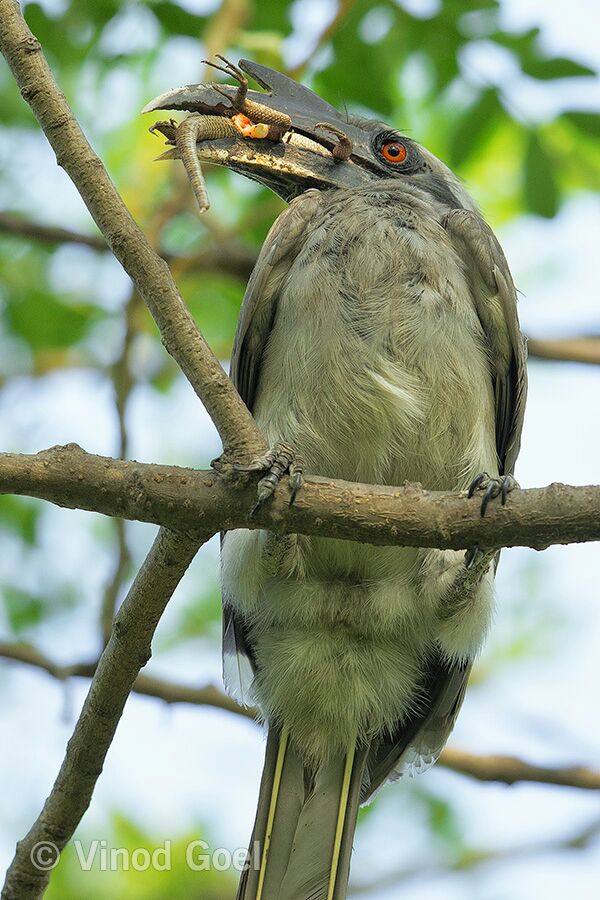 They are mostly arboreal and come to the ground:-
(1) To pick up fallen fruits from their beak  or
(2) To pick up mud pellets during the breeding season for sealing the cavity after the female has entered the cavity or
(3) For hunting of insects ,birds or reptiles such as garden lizard or small snakes .
Their presence in an area are indicators of large and long trees having hollow cavities.
Frankly speaking it is not a beautiful bird but has the most unique behavior and characterstic which birders know. The male is the most devoted husband who feeds the female while she is inside the cavity for more than 2 months .
At the end of the breeding season when female is about to come out of the cavity to supplement her diet I have observed male feeding the female garden lizard a number of times .
At this time of the year breeding season for this specie in Delhi is coming to an end as the females are already out of the cavities and even some of the chicks are out and the weakest are still to come out from their nesting cavities.
This was shot on 4th June 2015 in Delhi.
The way I have been covering this bird for more than 4 years this specie appears to communicate with me and I remember a very lovely song from the old film ANPADH ….आपकी नजरों नें समझा प्यार के काबिल मुझे ,दिल की ऐ धड़कन ठहर जा, मिल गयी मंजिल मुझे